Tag and release fish while taking home a feed

What’s that you say? I’ll never tag and release regardless of what I catch?

Well here’s a bit of my story, and I fish for a feed as well as tagging fish. Back in the late 1980’s I thought to myself, if I’m throwing back all of these undersized fish why not tag them? Well it took me quite a few years to track down where to get a supply of tags and it finally turned out to be CAPTAG, a fishing group based in Rockhampton. I joined the group and received my first 25 tags along with an applicator. I then tagged and released my first Barramundi in the Normanby River @ Kalpower in April 1993.     That particular Barra has never been recaptured, or, should I say reported as captured.

There is a misconception among some anglers that if a fish is tagged you can’t keep it, this is NOT the case.

If it’s of legal length put the fish into your ice box if you want to, you don’t have to throw it back. All that is asked is that you ring the free call phone number on the tag and supply the tag #, length, location captured and whether you kept it or released it. This identifiable data is NOT supplied to the Fisheries but helps to build up a picture of our fishery. Data results give species movement, along with growth and survival rates following capture and release, amongst other uses of the data. After you’ve reported your capture you will receive a certificate that informs you of who tagged the fish, where and when, and the movement and growth over this period. In some cases the fish may have been recaptured a number of times. Bill Sawynok of INFOFISH is the custodian of the tagging data collected in Queensland. So on with Tagging… Some reference grids existed in the early 1990’s but mostly for the Southern regions at that time. As I supplied information on tagged fish in different parts of North Queensland Bill Sawynok came up with new tagging map references for me after I ventured into un-coded areas. Now you’re probably saying this bloke’s crazy he’s giving away his fishing spots. Rest assured I’m not stupid and I’m not giving away any point data. The maps do not work in Latitude and Longitude but rather a coding system that does not require you to be any more accurate that to the nearest km.

I’ve had some interesting recaptures over the years. Two of the fish I tagged are listed below.

Tag # N16129 King Salmon tagged on the 27/03/2002 at the Oaks just South of Karumba size 580. I personally recaptured the fish in the same gutter on the 12/04/2003, size now legal so no guesses where it ended up. Now after many years of tagging in River systems I finally bought a larger boat and moved offshore continuing with tagging my undersized fish out there. Hang on how does a random Grid System work at sea you ask? Well here I do supply Latitude and Longitude – don’t jump the gun as I’m still not giving my spots away. Bill Sawynok is happy to have the co-ordinates to within 1nm and if you’ve caught the tagged fish then you’re most likely ON THE SPOT ANYWAY, depending of course on the species.

Out on the Reef a few years back I dispelled the Myth that fish don’t eat for days after they have been captured.

Tag #P78814 Coral Trout captured, tagged, and released by myself on the 11/04/2006 @ 0635 and recaptured a few hours later in the same boat by my son, on the same reef around 100ms away from where it was released. It may have looked like the same fish but the Tag put it beyond doubt. One thing you MUST learn if you are going to release fish on the reef, or paddocks, or deeper water in the creeks, regardless if you tag or not, is how to vent a fish if you have one with an extended or bloated stomach. Pricking the extended stomach is not the answer, even if you have seen the Coral Trout fisherman do it on ET’s fishing show. You’re online reading this article so take a moment to watch Ryan’s barotrauma video and update your knowledge on venting fish.

I use the end of a large syringe super clued into a piece of irrigation sprinkler poly pipe around 220mm long. I keep the cap on the pointy end when not in use. Don’t push the cap on too tight as when it’s time to remove it you will give yourself a nice little jab due to the pulling motion and the opposite reaction. I’m speaking from experience here!

Another piece of useful equipment, when tagging or just releasing fish at sea, is the item in the photo below, a release weight. When used correctly it gets the fish back to the depths fast enough to beat the men in the grey suits and a simple tug on the line sees the fish released, to continue foraging and putting on a bit of length and weight ready for the next adventure upwards.     A quick and easy release weight can be made as in the image. Turn one of your large hooks, in my case a 9/0, into a barbless hook and screw it to the 16oz sinker with a small stainless screw and then cable tie the other end of the hook to the eye of the sinker. You really don’t need to vent when using this method but I do both in the interest of increasing the chance of survival for the fish in question. Now get an old handline with ~ 40m of 80lb line and tie it directly to the sinker – you’re ready to go.

OK so I’m a Recreational angler and I really do fish for a feed while I tag most undersized fish.

Why do I say most, well it’s because there is a defined set of species that are required for tagging and anything not on the list is just vented and returned without a tag. If I bag out on a particular species I commence tagging the legal sized fish as well, that is if I continue fishing. Hang on, I can here a few of you out there going off about trying to Catch my Limit and not Limiting my Catch. Well I can assure you most times I’m happy to just put a few in the box and if I’m lucky I might bag out on 1 species but a total bag out, now that’s another story.   As you can see from the photo above I don’t waste much when I go fishing, I’d go so far as to say the only thing not eaten is the guts, gills, bones and scales. Cryovac definitely beats the old freezer burn problem and as you can see above with the coral trout frames ready for the freezer I try to avoid this problem. Just know when to seal the bag, as if you take too much air out the bones or spines will perforate the bag and you’ve then wasted your time and freezer burn will rear its ugly head. The fillets and wings are packed, the air bag is dried (great tasting when fried), the frames are cryovaced (good when the fillets run out) and the heads end up in the large fish head soup saucepan along with an assortment of other fish heads. Waste not, want not. Regardless of what ends up in my esky you need to walk a mile in my shoes to understand my way of fishing. Don’t be a keyboard warrior and judge what you don’t understand. I don’t live on the coast, coupled with the fact that I work out bush for extended periods, so my finding a window to venture offshore is extremely limited and if the fish bite then I’ll enjoy the moment. Most of the favourable conditions, when I’m home, either fall during the week or on a weekend when I have other commitments. Of course the BEST TIME for fishing works on Murphy’s Law – usually while I’m away out bush working. For those of you who live by the sea and can go at the drop of a hat, I’m happy for you and I wish you well. However I’m not so fortunate, but I’m happy where I live and fully appreciate my few trips away from the sweet water. As I’ve mentioned, being home on the weekend and having favourable wind conditions is a somewhat rare event. So as you’re starting to appreciate, Mother Nature and work commitments are the major controlling factors of my fishing activity. A good example is the last time I had my boat out the Reef was February and it is now September. So if you’ve done the Ryan’s Barra Basics online course and your catches have improved, why not put the odd dart into a fish or two? If you haven’t done the Barra Basics please consider it, as it as it is only a fraction of what you have currently invested in your favourite past time. Everyday we’re all getting older and with age comes experience, however experience is based on trial and error and mistakes along the way. With the Barra Basics course you have a short cut to experience from a proven knowledge base.

Anyway I’ve got a bit side tracked so let’s back to the start, tagging while still putting a feed in the box.

Before you throw back that undersized Trout, Mack, Red or whatever, why not consider tagging it? You’re reading article this online so why not contact Bill Sawynok at INFOFISH just click on the link and take it from there. My boat for the past 8years is not a true reef boat but more of a compromise boat that I use for Reef fishing on the East Coast and Barra fishing in the Gulf. It manages to put me onto a few of the species on the tagging list each year. To date I’ve tagged 3260 assorted species with 1347 of these being Barramundi. Now you’ve read this far consider doing your bit for the Fishery, don’t wait for someone else. Tightlines Stephen aka Pedro  < ’) / / / > <   So if you enjoyed this story by Pedro and would like to read or watch some more great fishing tips, click the links below; Rigs and Tackle for North Australian sportsfish Anchoring with the twin anchor technique Preventing line twist when using a spinning reel   Or sign up for one of our free mini courses; Ryan’s Sounder Presentation Ryan’s Barra Strategies Workshop Anchoring your boat with the twin anchor technique Keeping live bait without a pump 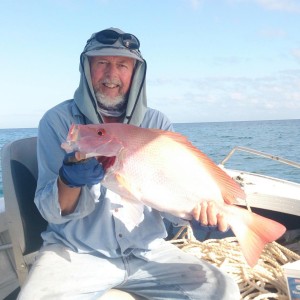