Guest writer and Ryan Moody Fishing Ambassador Ben Weston gets technical with technique in his first article for our blog.

Changing the Angle of the Dangle…

Barramundi can be a fickle or somewhat frustrating species to target with consistent results.  This is fairly obvious by the amount of grey hairs on Ryan head after 35 years of intimately targeting them, and rightly so.

I have only reached 11 years of marriage, but I reckon I could confidently say that after 11 years of chasing barra I will be reaching for the hair colouring in aisle 11 of my local Woolies to conceal the greys.  I like many have piled hours and hours of time and frustration into these things, but all is not lost, consider it learning on the job.

If you’ve completed the Barra Basics (BB) Course you will know Ryan’s framework, but those who may be sitting on the fence and contemplating participating in the course, this framework has been developed in short to put you in the right place at the right time, using the correct techniques to maximise your results.  Or ‘Fish Smarter’!

When you target barra on a regular basis, both on lures or baits you will continue to learn and grow in knowledge of the species.  Environmental conditions differ from place to place, so fish in each location may respond to differing techniques.  The long and the short of it is the more you fish, the more you learn, which I am sure Ryan will agree.

During my last trip before the close of the 2016 season, while fishing with a good mate of mine and fellow BB student Ben Gilbertson, we learnt a very valuable tool which could be the difference in making your results luring for them somewhat more fruitful. As humans we can sometimes get stuck into what we have always known, after all we are creatures of habit.

During this session we caught 14 barra, ranging from 65 cm to a beautiful 104 cm specimen and it wasn’t a fluke.

It became pretty obvious to us after a couple of fish that a lure presented differently made it more appealing or realistic to this particular school of fish.  It became the norm that every 2 casts resulted in either a hook up or bump, which I think one would agree pretty solid evidence that there was something in changing up the cast angle.

Continue to learn and don’t rule out anything, try everything.  They are very cool animal and smarter than what we give them credit for!  Enjoy the learning curve and good luck targeting them in 2016 and beyond.

If you’d like to know more about the Barra Basics course, putting people like Ben Weston and Ben Gilbertson onto quality fish consistently, click the button below.

Additional posts on casting and luring can be found on the links below; 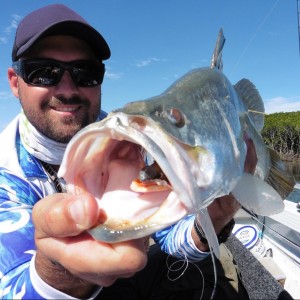